10 Bad Hindu Rituals that must be Abolished

Hinduism is a religion of nearly 900 million people. It is one of the oldest religions in the history, dating back to 1400 BC. Hinduism is effectively diversified culturally and religiously. Hinduism recognizes nearly 330 million gods where Brahma, Vishnu and Shiva are majorly celebrated deities. It is considered to follow the eternal duties also known as Sanatana Dharma which is also an eternal Law. Mythological writings are wholeheartedly followed by Hindus; such as Vedas, Upanishads, Bhagwat Geeta, Mahabharata and Ramayana. Dharma, Artha, Kama and Moksa are considered to be Hindu beliefs and objectives of human life. Hinduism is divided in numerous sects with differentiated religious traditions and rituals. Rituals are major part of any Hindu devotee. Rituals are performed with great faith. Pujas, festivals, sacred ceremonies, prayers, namaste are common rituals which can be observed in Hindu society. Some of these rituals are so offbeat that they need to be stopped for the sake of humanity. Here is a list of 10 bad Hindu Rituals that must be abolished. 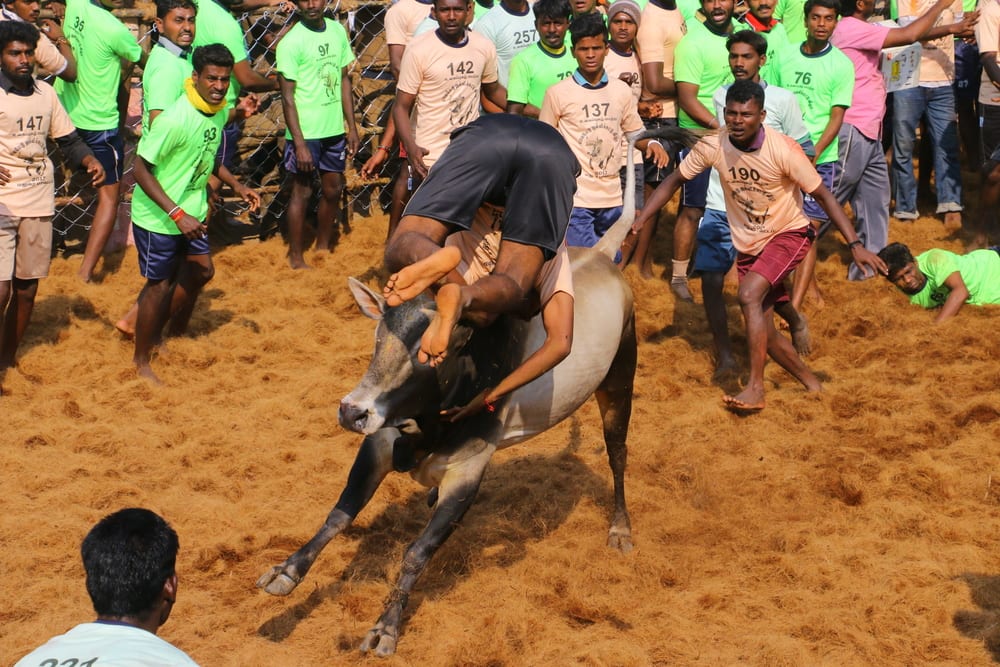 Jallikattu is a sport played in Tamil Nadu during harvest thanksgiving festival of Pongal. In this ritual Bull is released in an open ground so that players, young adults, try to tame them or hold them to get reward. Nutritious food and proper training is given to Bulls so that they remain healthy and strong. Bulls are outraged by sprinkling chili power in their eyes, they are fed with alcohol and their testicles are pinched before the fight. Bull fighting is believed to be existed 2000 years in Tamil Culture. 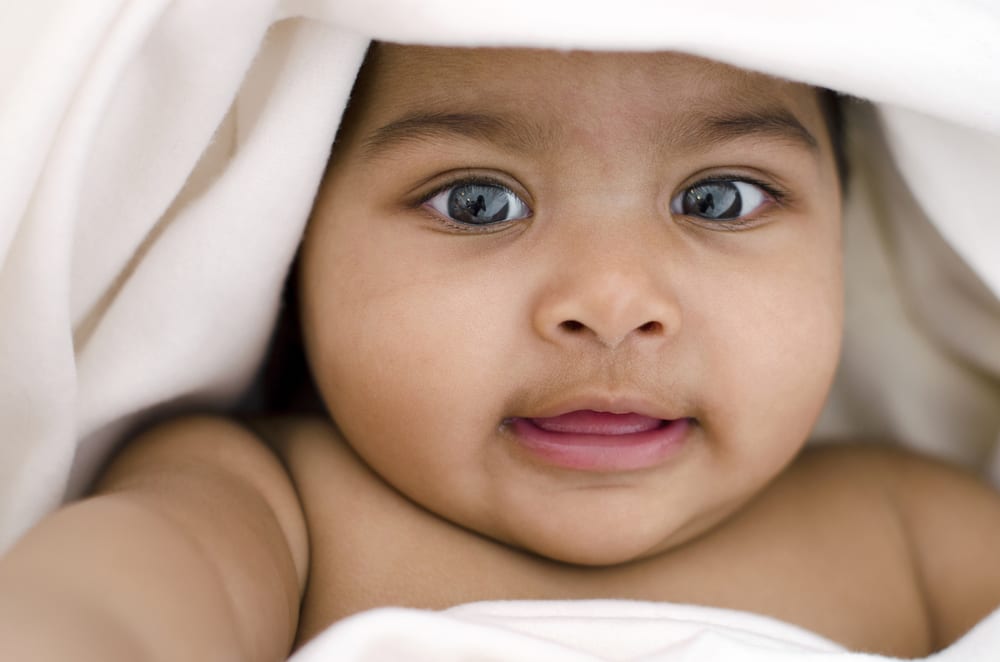 Babies are thrown from the height of 30 ft from the ground in a ceremony. Married couples who wish to gain some good luck take part in this ceremony. Villagers assemble in Sri Santeshwar temple (Indi in Karnataka) to perform this ritual in the month of December. More than hundred babies are thrown from temple roof and are caught in a sheet held by people. This ritual is claimed to have existed over seven centuries. Few villages in Maharashtra also practice this ritual. 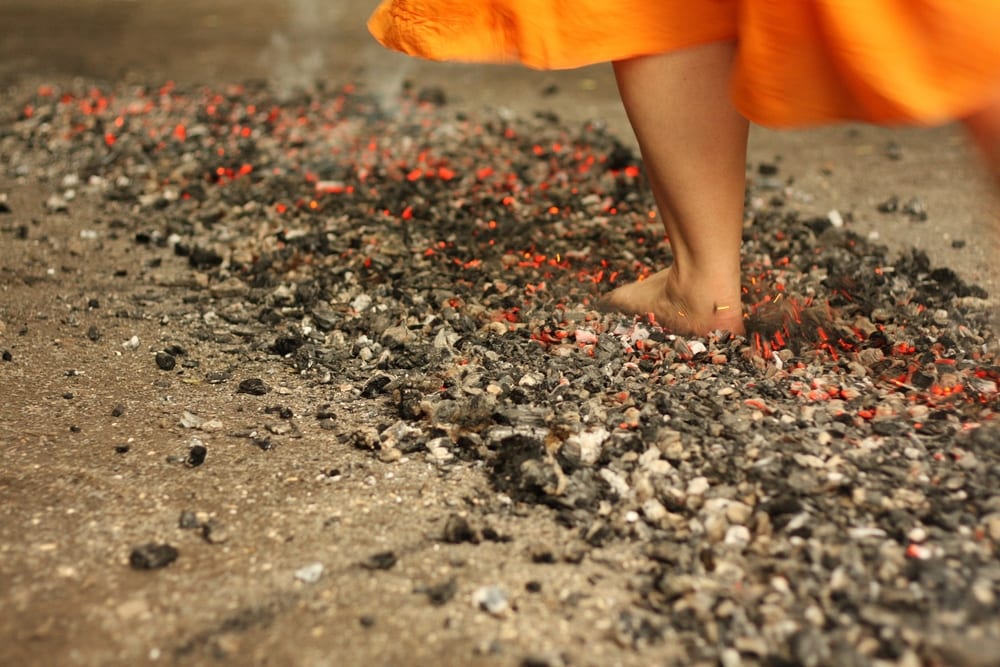 Thimithi is celebrated, in months of October-November, in Tamil Nadu. In this ritual several scenes of Mahabharata are re-enacted in honor of Draupadi. Devotees walk though bed of fire in order to gain blessings by the goddess. It is performed for good harvest, purity from heinous crimes and to prove innocence. Devotees believe that only faithful will be speared from the ordeal. 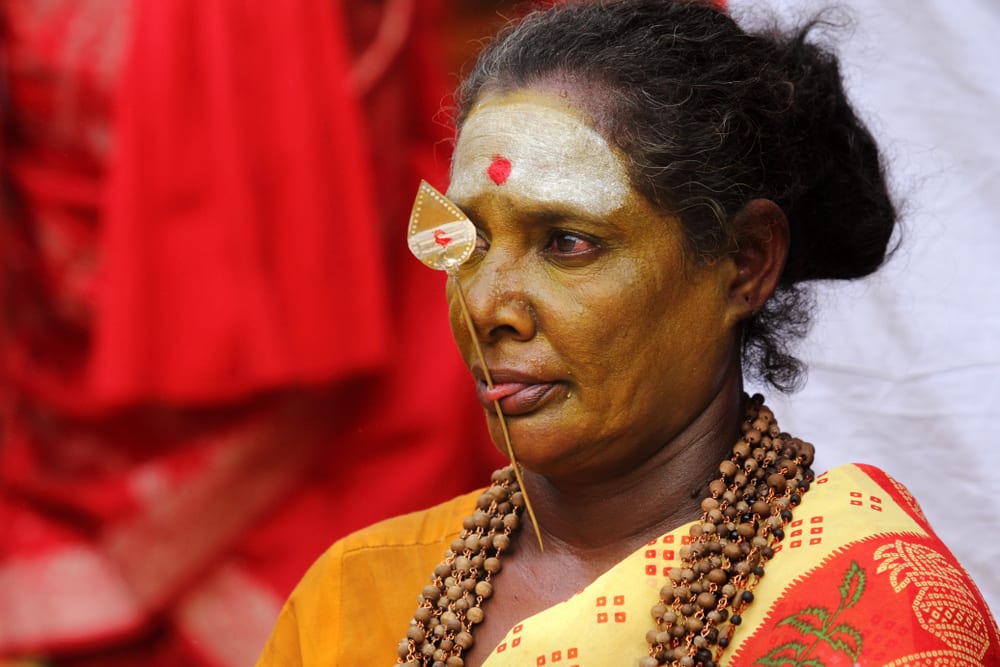 Beinon village of West Bengal observes an ancient practice of Tongue piercing. Long and sharp metal rods are pierced in tongues of young boys in order to cleanse their souls. After piercing these individuals have to collect alms and wear garland around their necks. The iron rod is removed once they have walked around village. This ritual is basically performed by low caste Hindus. Iron hooks are also inserted into skins and placed free falling from high platforms.

‘Madey Snana’ ritual is performed in Kukke Subrahmanya temple of Karnataka. In this ritual lower caste people roll on the floor over leftover food by Brahmin’s on banana leaves so that they can get rid of various sickness. It is also believed that performing such ritual would bring good luck, cure them from diseases and lift family curse. People blindly follow this ritual which portrays caste-based inequality. It is against human dignity and hygiene. 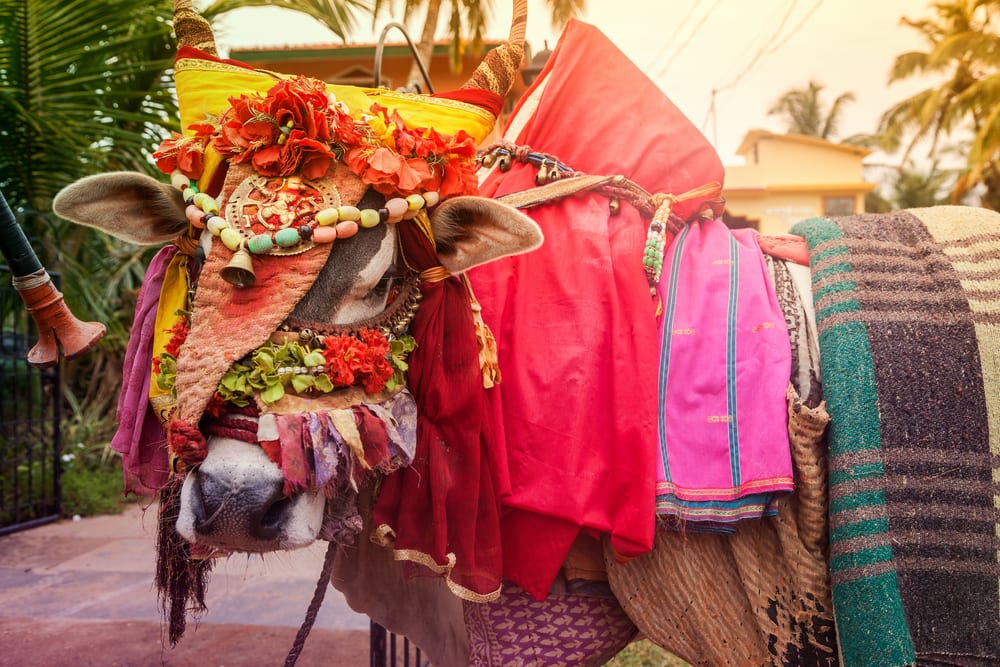 Govardhan festival is observed on Ekadashi, a day after Diwali festival. This festival has a ritual of men laying on ground so that their cattle can trample over them. Ujjain region of Madhya Pradesh and Bhidawad village of Maharashtra are some of the places where this ritual is performed. Cows are decorated with colors, henna and flowers. The whole village gather to witness the ritual. It is believed that all prayers are answered by Lord Pashupatinath during this ritual. Cows are worshipped and are considered sacred in Hindu religion. 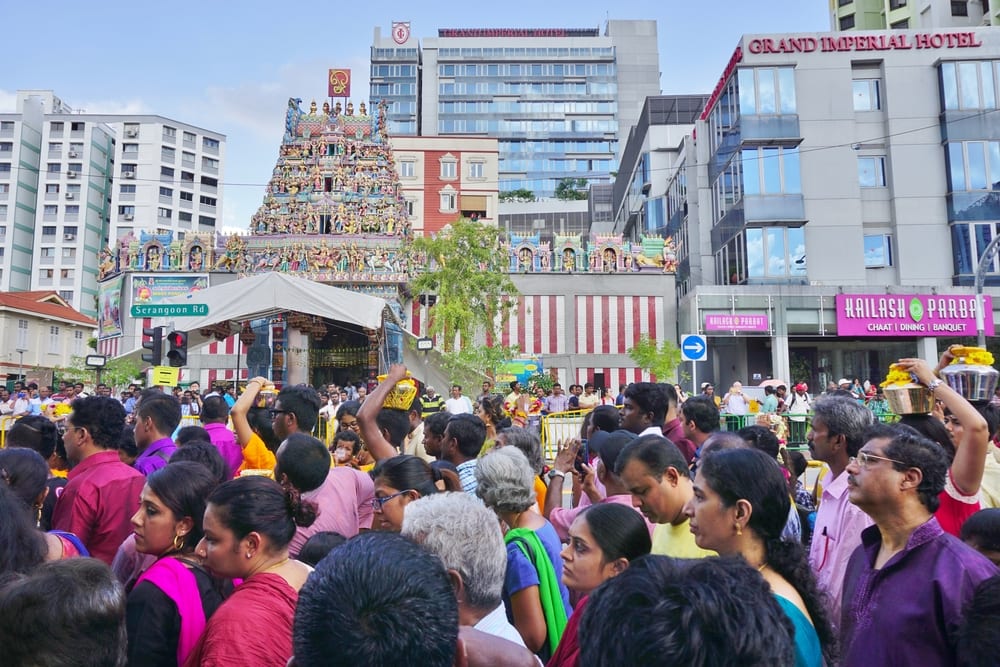 Thaipoosam is a festival that honors Lord Kartikeya, son of Shiva and Parvati. In this festival , evotees pierce their bodies with skewers, lances (Vel) and hooks with heavy objects. Tongues and cheeks are also pierced in order to gain full concentration. They are known as ‘Kavadi-bearers’. Devotees also shave their heads and undertake pilgrimage in their acts of Devotion. It is celebrated in Tamil Nadu in month of Thai. Regular drumming and chanting make the devotees to enter in state of trance. 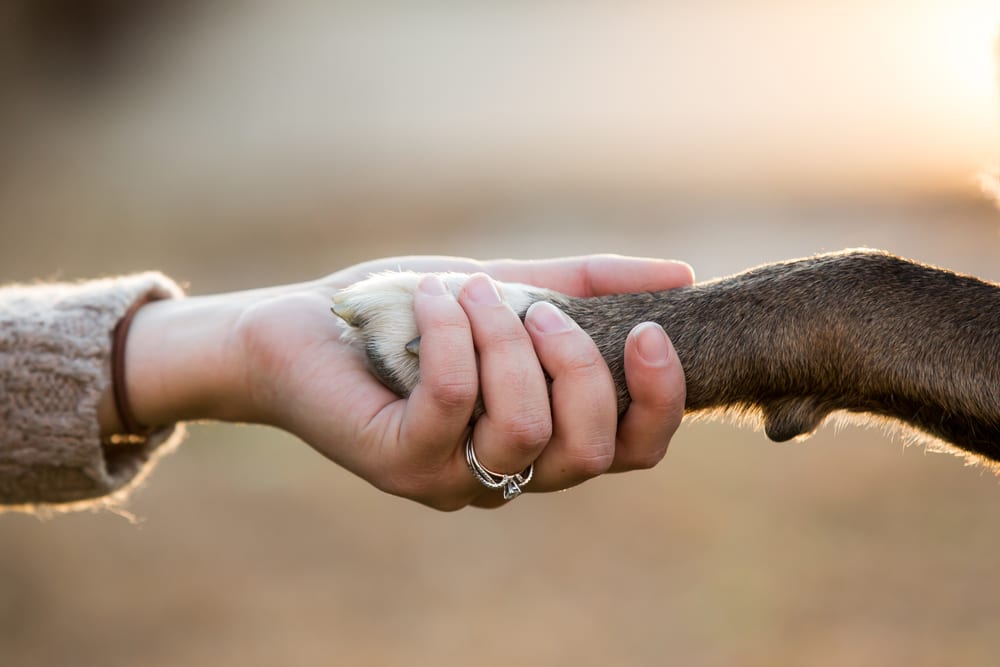 Women with ‘Mangal Dosh’, natural deformity, cleft tooth are considered to be possessed by spirits. To get rid of such spirits many superstitious believers perform ritual of Human-Animal Marriage. To exorcise the ghost the possessed girl is forced to marry an animal such as a dog or a goat. This marriage is lavishly celebrated. Santhal tribe of Bihar, Odisha, West Bengal and Jharkhand perform this ritual to ward off evil spirits. After the ritual the girl is considered to be pure and eligible to marry some real boy. 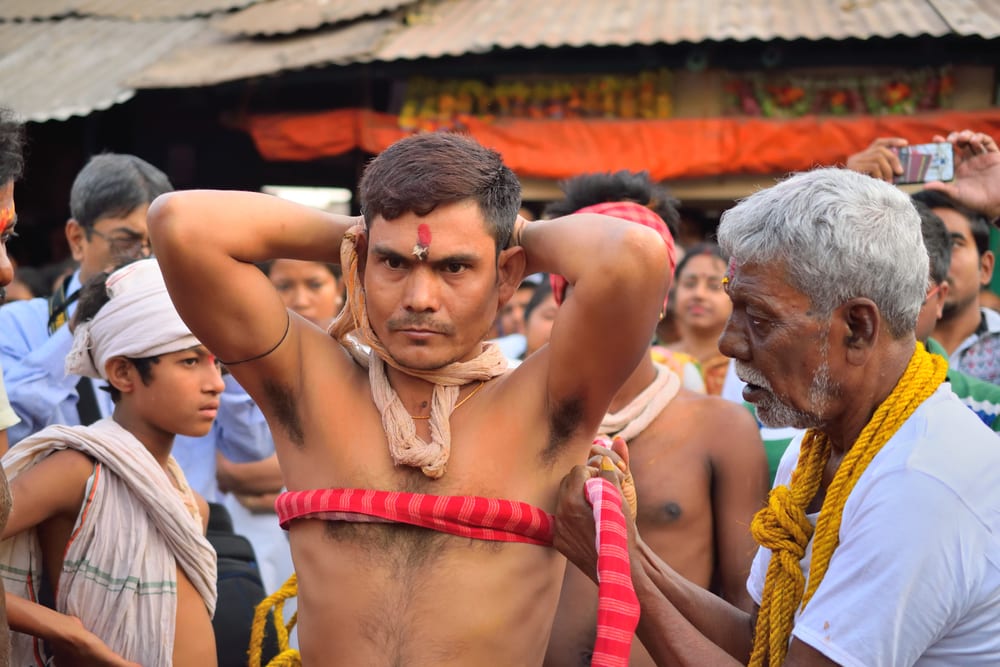 Hook Swinging is also known as ‘Charak puja’ is a ceremony to appease Goddess of evil destinies. In this Ceremony men are swinging aloft by means of Iron hooks on the back with no other support. The chosen men are hooked and these hooks are tied at end of a pole which is then raised to about 40 feet from ground. A large gathering of devotees then observe these men carried out in a car through streets. This ritual is performed in Kali Temple by dancers dressed as Garuda (eagle) in some parts of Kerala. Festivals such as Makara Bharani Day, Kumbha Bharani Day and the Thookam festival observe Hooking ritual. 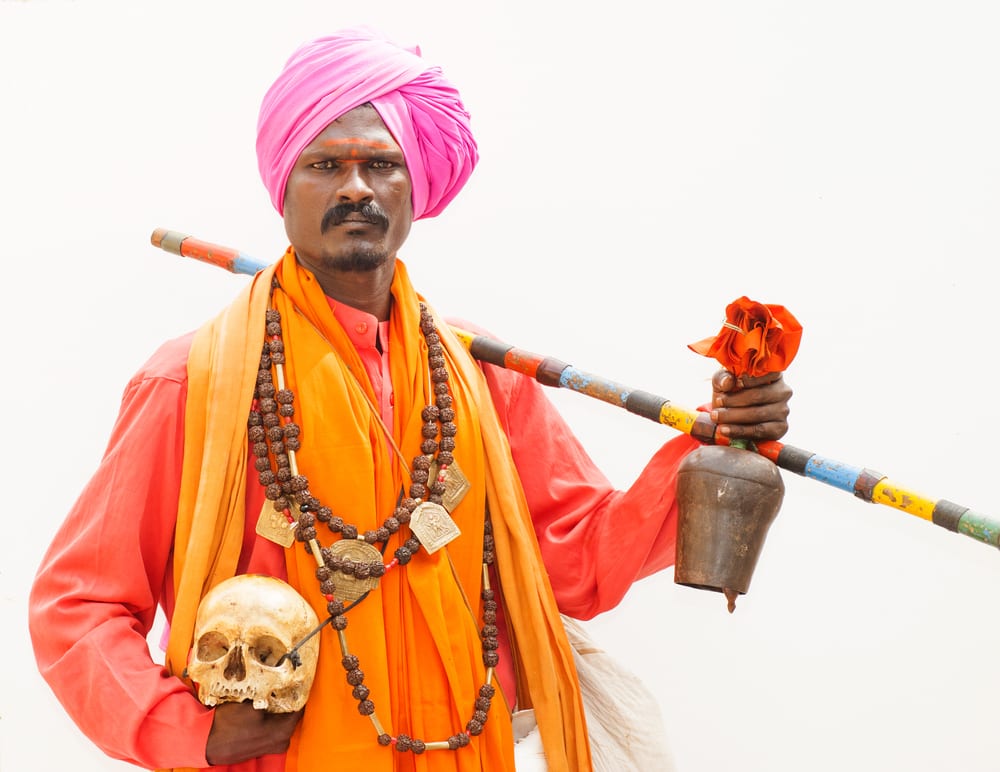 Aghori monks are devotees of Lord Shiva. They are highly feared and respected Sadhus and believed to have precognition. This notorious tribe is well known for their bizarre rituals of using human skulls or ‘Kapal’, cannibalism and making love to corpses. They reside near cremation sites of Varanasi, cold caves of Himalayas, jungles of Bengal, deserts of Gujarat. They believe that Goddess Kali demands satisfaction through meat, alcohol and sex. They try to eliminate discrimination through their acts of eating feces, human flesh and fluids. Aghories have specific ritual of intercourse with an appropriate corpse which is believed to give them supernatural powers. They smoke Marijuana which helps them mediate and concentrate on Mantras.

Lastly, rituals are part of long-lasting Hindu traditions. Devotees are performing such unusual rituals in name of God from times immemorial.